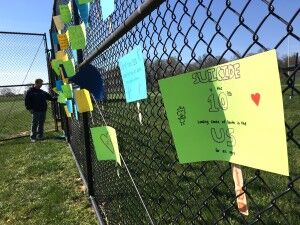 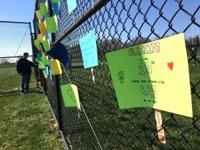 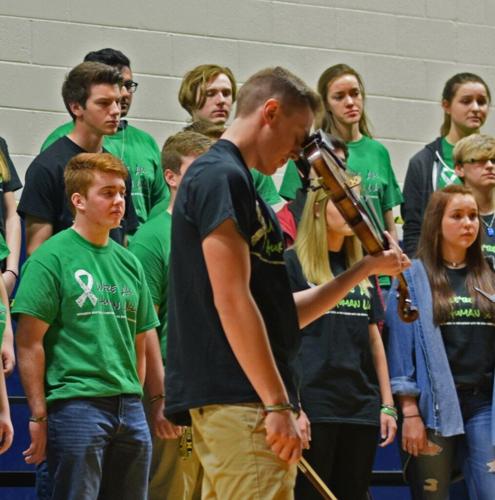 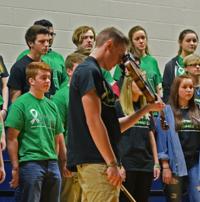 Jordan Bartel performs a song dedicated to his brother, Ryan, who took his own life in 2014. (Photo by Alexis Ward)

Morning classes at Woodgrove High School were canceled so that the entire student body could go on a walk. It was an unseasonably cold and breezy morning, but few complained. Their thoughts and conversations were on Ryan, and Will, and Christian, and other young people from the Loudoun community who had lost their lives in suicide-related incidents in recent years. The walk was organized by the school’s We’re All Human Committee in partnership with

, which was founded by the parents of the Woodgrove senior who took his life in 2014. The inaugural We’re All Human walk was designed to not only ensure the school’s 1,500 students knew they were not alone in their struggles, but to spread that hopeful message to people throughout Loudoun. [caption id="attachment_9445" align="alignright" width="420"]

Students posted hopeful messages for the We're All Human Walk Wednesday. (Danielle Nadler/Loudoun Now)[/caption] Woodgrove senior Aiden Bergel said the western Loudoun community has been hit especially hard by tragedies prompted by mental illness, naming four teens who were killed in recent years. “Maybe if there was not a stigma on mental illness, we would have not lost these contributors to society’s future,” he said. “We’re here to talk about this.” Close to 2,000 people joined the 1-mile walk on the campus, and then crowded into the school’s gym for an assembly. Ryan Bartel’s brother, Jordan, performed a song accompanied by the Woodgrove choir dedicated to his brother. Students shared their film that told the stories of several of their classmates’ struggles with depression, anxiety and other mental health issues. Before the film got rolling—technical difficulties delayed it by 10 minutes—Suzie Bartel grabbed the mic to fill the time with her family’s personal story, a story that brought many in the audience to tears. Her son, Ryan, had Asperger’s syndrome and was the target of bullying until high school, when he found a group of friends he could relate to. Still, he dipped in and out of depression and kept a lot of his frustrations over school and social challenges to himself. He took his own life Oct. 15, 2014. After Ryan’s death, Bartel and her husband felt they needed to do something to stop other families from experiencing a similar tragedy. They started a foundation and created a scholarship for graduating seniors, but wanted to do more to impact hurting teens. “We knew what we wanted to do, but didn’t know how to get there,” she said. She contacted Woodgrove High School to see if students were interested in working with the foundation. Within a few months,

and began to make real changes to let young people know there is help. “Each time we held meetings, more students would show up,” Bartel said. “You guys turned our vision into a reality.” [caption id="attachment_9634" align="alignleft" width="398"]

Jordan Bartel performs a song dedicated to his brother, Ryan, who took his own life in 2014. (Photo by Alexis Ward)[/caption] Loudoun County Chairwoman Phyllis J. Randall (D-At Large), who joined students on the walk, said she wouldn’t have missed it for anything. She stopped at a sign one student had taped to a chain-link fence that read, “Don’t lose hope.” Randall, a mental health therapist, said it’s not depression that triggers a person to take her own life, but hopelessness. “People who don’t have hope do not think there’s anything in their future worth living for,” she said. The Woodgrove students’ event, she added, is exactly the kind of thing that can bring change. “No one talks about suicide. This brings it out in the public so people know they’re not alone and there is help. This is brave.” Bartel’s hope is for every school in Loudoun to host an annual We’re All Human walk and assembly, with a focus on suicide prevention. The movement has already spread to an elementary school on the opposite end of the county. Teachers at Arcola Elementary in Dulles put on a We’re All Human walk for students today, and, instead of directly talking about suicide, taught students about how small, kind acts can have far-reaching effects. “If you can, at an early age, teach kindness and awareness, then they grow up to be good citizens,” Bartel said. “We have a huge problem in our community. … But if we can all come together, we can make a big difference. Today is just the beginning.”