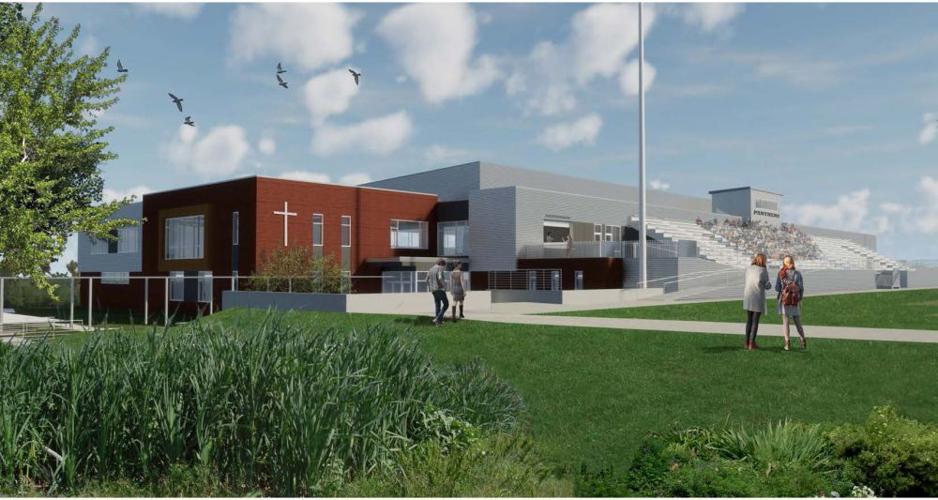 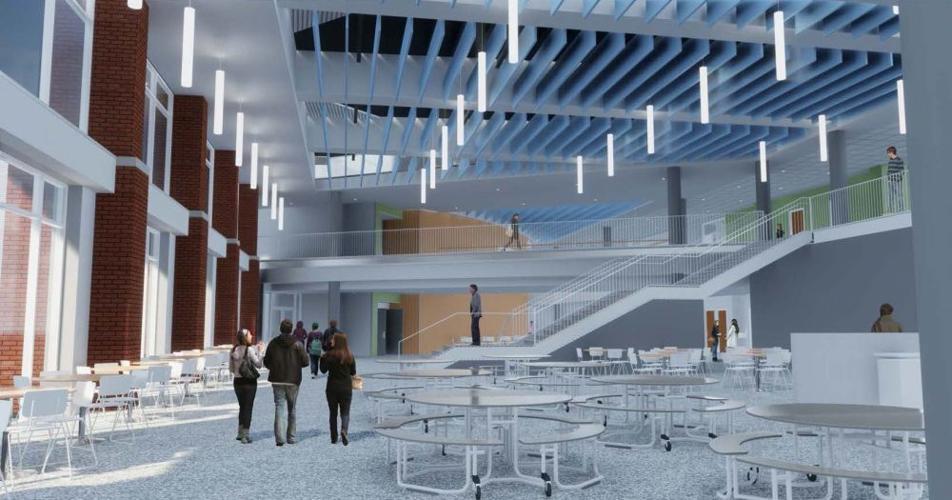 Dirt is being moved on a long-anticipated school project in Loudoun County. The first visible signs of Paul VI Catholic High School’s future campus can be seen on a 68-acre site just off of Braddock Road. On the site this week, construction vehicles could be seen waiting for the ground to thaw before they begin digging the building’s foundation. If the construction schedule goes as planned, the school community will move to the new campus by August 2020. It will be the first private high school in the county to rival the facilities offered by local public high schools. And Loudoun families are excited. “We’ve met with many people in Loudoun County and every time we get a very positive, excited response,” said M. Christina Desmarais, director of transitional marketing for the school. “We hear things like, ‘how quickly can you guys get here?’” The Diocese of Arlington made the decision to move Paul VI’s campus from Fairfax west 14 miles to just inside Loudoun County a few years ago as its enrollment continued to grow. Paul VI Catholic High School has operated out of the former Fairfax High School building since it opened in 1983. Since then, it’s grown from 350 students to close to 1,000. Eileen Curren, director of communications, said that the school’s current campus has been a good home, but they’ve outgrown it. “Now it’s exciting that we’re having a building specifically designed to meet the needs of our community,” she said. The move 14 miles west means the school’s campus will quadruple in size, from 16 to 68 acres. That will open up space for athletic amenities including a football field, soccer field, baseball diamond and tennis courts. Architects designed the new school campus to feel a lot like a college campus. Every floor of each academic wing will have a teachers’ lounge and a commons area with soft seating that can be used for individual or group study. The plan includes several “learning corridors” with benches and other seating areas where students can study, work together on a project or eat lunch. [caption id="attachment_45713" align="aligncenter" width="1000"]

Paul VI Catholic High School’s future home in Loudoun is designed to feel a lot like a college campus. It will include a chapel at the center and several athletic facilities, including football field, soccer field, baseball diamond and tennis courts.[/caption] The chapel will sit prominently in the central courtyard, able to be seen from almost anywhere on site. The courtyard will extend off the dining commons, a two-story atrium where students will gather for meals, team meetings, morning class prep and afterschool pick-up. Also at the core of the campus will be the media center, or library, with audio-visual and information technology equipment, as well as seating areas for research and study. The initial design plans for between 1,200 and 1,300 students. But school leaders may consider expanding it one day to accommodate 2,000 students. “The sense of community is really important to us,” said Kate Andreottola, director of advancement. “So that growth will be very smart and gradual, at a planned pace, without sacrificing that sense of community.” A home builder recently told Desmarais that he’s quick to tell families considering moving to Loudoun that it will soon be home to Paul VI Catholic High School. “We’re going to be very competitive with the local public high school,” Desmarais said, “and we’ve added another layer that they can’t and that’s the value added that we believe. We have everything that they have and more.” Students do not have to be Catholic to attend the school, but mass is offered in the chapel twice a day, and students are required to attend a monthly liturgy. [caption id="attachment_45714" align="aligncenter" width="1000"]

The future campus of Paul VI Catholic High School will include open dining commons.[/caption] The news that Paul VI will move to Loudoun was a game changer for the Bradford family, who lives in Willowsford. Lisa Bradford’s three kids—in second, fourth and sixth grade—attend St. Veronica Catholic School in Chantilly, and the pending question for the family was where to send them for high school. “It’s always been, ‘what are we going to do? Are we going to drive them to Fairfax?’” Bradford said. “Now the school will literally be up the street from us, which makes it so exciting.” Families in her neighborhood who are not Catholic are also talking about sending their kids to Paul VI, especially after undergoing more than one school zone assignment changes. “People are getting frustrated that their kids are changing schools every few years,” she said. “It’s almost like a light’s gone off—this is an option, and people are getting excited about it.” The decision to move the campus has some Fairfax families disappointed, but most are warming up to the idea, Desmarais said. “The decision was made, and we embraced it. We know it’s a smart move. … It’s kind of a once-in-a-lifetime opportunity. So, I think once people wrap their minds around it and see the end result, they’ll get excited.” “The school is more than a building,” Curren added. “The school is a community that we have here and we have such a strong community. We’re just excited to take our family to a new location and start a new chapter.” Tuition for the current school year for one Catholic student starts at $14,625. The non-Catholic rate is $19,315. Costs decrease for siblings. Learn more at paulvi.net.