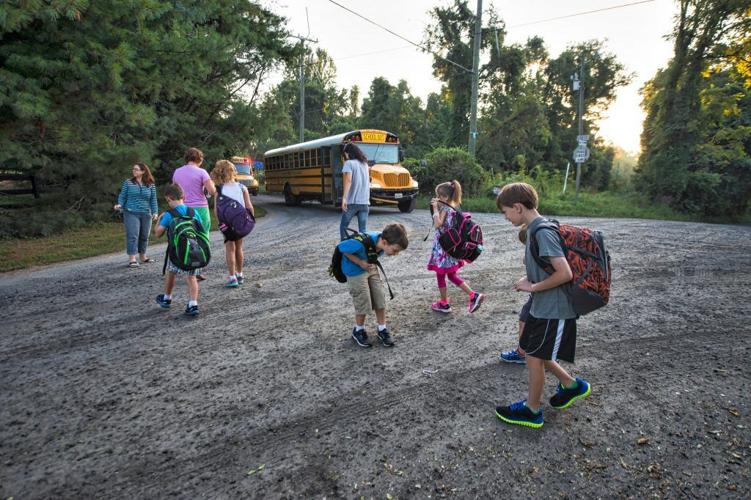 Kids who leave near North Fork and Shelburne Glebe roads in western Loudoun were up early Monday as they navigated changes to their bus schedules. [Douglas Graham/Loudoun Now] 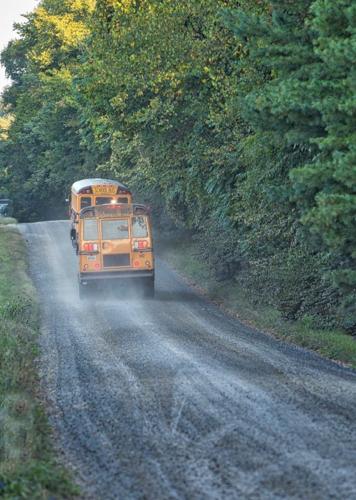 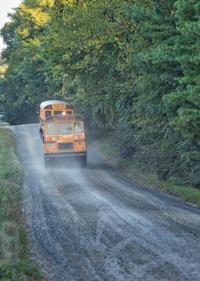 Like most western Loudoun kids, Erin Calley is used to long school bus rides. Last year, she rode the bus for 30 minutes in the morning, from her home near Middleburg to Blue Ridge Middle School in Purcellville, and for 90 minutes in the afternoon. “Usually, I try to get a little homework done before the roads get too windy,” she said of her afternoon rides. Then she sleeps or listens to books on tape until the bus stops at the end of her driveway at 5 p.m. This school year, she’ll be on the bus 30 minutes longer each day, with an earlier pickup time of 7:20 a.m. “That will mean 2 hours and 50 minutes that a 12-year-old is spending on a bus every day,” her mother Susana Calley said. “When we saw that we were devastated.” Many families who live along some of the county’s most scenic roadways woke up for the first day of school Monday to find they had even longer bus rides ahead of them than in years past. Some students are scheduled to be on a bus for three hours a day. Calley spoke with a dozen or more families in similar situations. She said there’s a misperception that most western Loudoun families have a stay-at-home parent who can drive their kids to school. “They’re farm workers, firefighters, teachers, housecleaners. … These are rural families who don’t have the resources to take their children to and from school.” After years of her children and her neighbors spending up to three hours a day on the bus, Tami Carlow, of Taylorstown, decided to work on a solution. She met with leaders in the school division’s Transportation Department for more than a year to organize a shuttle program that delivered students to Lovettsville Library after school. The kids hung out at the library while they waited for their parents to pick them up. “They were on the bus for 30 minutes compared to an hour and a half after school. I was in tears when it first started because it worked so well for so many families,” she said. “Then we got an email this summer that said they weren’t going to fund the shuttle.” Carlow and her neighbors understand that their kids will have longer bus rides than kids living in Leesburg or Ashburn. “But three hours a day is just cruel,” she said. “They expect kids to do everything—sports, homework, get a good night’s sleep and come ready to learn.” “It’s like they’re adults and commuting to a job,” said Mo Thomas, who also lives in Taylorstown. “I feel like they talk about how we have such great schools here, but it seems like we don’t put any money into transportation,” which affects students’ learning. [caption id="attachment_20196" align="alignright" width="372"]

Kids who leave near North Fork and Shelburne Glebe roads in western Loudoun were up early Monday as they navigated changes to their bus schedules. [Douglas Graham/Loudoun Now][/caption]Several families who live along dirt roads south of Lincoln are upset that bus service to their homes has been discontinued, requiring students to walk along Shelburne Glebe Road, a narrow gravel road, to their new bus stop. Adrienne Gardner, a parent of two students, said she’s generally in support of public transportation and more kids walking to school, but the roads in her neighborhood are unsafe for pedestrians, especially for kids as young as 6 years old. “Most of the way there’s no shoulder, so they have to walk on the road—I don’t think the Transportation Department has come out and seen this,” she said, adding that in the winter it’s dark during morning pickup. “I know there’s a safer alternative.”

Why the Long Ride?

There’s nothing particularly unusual about the changes made to bus routes this school year, according to Kevin Lewis, the school system’s assistant superintendent of Support Services. “Bus routes and pick up times are revised every school year based upon many factors,” he wrote in an email to

. Families new to the county, attendance boundary changes, and students moving from primary to secondary schools all require route adjustments, he said. But other factors outside of the yearly ebb and flow of a school division are also in play. The Transportation Department has seen a lot of leadership changes in the past two years. The current director of transportation, Michael Brown, was appointed to the post less than four weeks ago. He replaced Lonnie Reavis, who resigned earlier this year after first being placed on administrative leave. The school division’s Public Information Office would not say what prompted the action. Reavis was on the job for only 18 months, following the retirement of Alvin Hampton, who retired in September 2014 after leading the department for 13 years. The department’s budget has also taken a hit. In the last seven years, its funding has increased by 23 percent while the county’s enrollment has grown by 38 percent. “We’ve struggled with transportation funding since I’ve been on the board,” said School Board member Jill Turgeon (Blue Ridge), who represents a large portion of western Loudoun. She will look into some of the more extreme busing concerns to try to find solutions, she added, but funding is a major obstacle. “I’m not trying to diminish the transportation concerns, but we’re trying to make the best use of what we have and put as much as we can in the classroom.” [caption id="attachment_20420" align="alignleft" width="303"]

School buses navigate gravel roads in western Loudoun on the first day of school Monday. [Douglas Graham/Loudoun Now][/caption]As part of the board’s fiscal belt-tightening effort, the School Board has during the past three years instructed the staff to cut back on the number of students who receive bus service. They expanded school “walk zones” at many schools to up to 1 mile for elementary students and up to 1.25 miles for middle and high school students. That’s meant several thousand more students walking to school. They also launched a Safe Routes to School initiative that’s designed to provide more bike lanes and safe walking routes to and from schools. Carlow said she, and many other western Loudoun families, would be willing to pay a fee for shorter bus rides for their children. Virginia law prohibits school systems from charging for transportation. Former School Board member Bill Fox advocated a change in that law, but his efforts did not gain much traction. The school division is also in need of bus drivers, with 89 unfilled positions. Lewis put a call out for anyone interested in working as a bus driver. Starting pay is $18.10 with benefits, and most of the positions require four-hour work days. Learn more at

. Funding and employee shortages are understandable challenges, but one small change that could go along way toward making families happier is improved communication, Gardner said. She and her neighbors were never told about their bus stop changes, but discovered it on the online parent portal, ParentVUE, less than a week before school started. Families affected by changes to walk zones are notified “no less than three months prior to their effective date,” according to division policy. “At a minimum, I want them to give the equivalent notice that they are required to give to walkers so the appeal process can go through,” she said. It would also give transportation staff time to take a second look at some of the most dire situations. The goal is to keep bus rides to no more than an hour, Lewis said. “But it is not uncommon for routes to exceed that target,” he added. But some families may see improvements as the school year gets rolling, he said. His department will analyze arrival times and, as he put it, “adjust accordingly.”