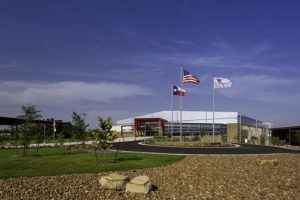 One Loudoun developers point to the success of the Round Rock Sports Center in Round Rock, TX, as support for its plans to build an indoor recreation center. 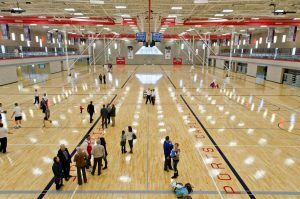 One Loudoun developers point to the success of the Round Rock Sports Center in Round Rock, TX, as support for its plans to build an indoor recreation center.

One Loudoun wants to build an 80,000-square-foot indoor recreation center and hand the keys over, lock, stock and barrel, to Loudoun County. In exchange, One Loudoun wants to add 685 apartment units, 40 townhouses, and a mini warehouse self-storage facility on its 358-acre property. “The difference between this type of proffered contribution, which would be constructed by One Loudoun and turned over wholesale, ready-to-go, to the county, is that it’s a revenue-generating tourism attraction,” said Colleen Gillis, a partner at law firm Cooley LLP who represents One Loudoun. [caption id="attachment_14278" align="alignleft" width="300"]

One Loudoun developers point to the success of the Round Rock Sports Center in Round Rock, TX, as support for its plans to build an indoor recreation center.[/caption] According to Gillis, the center would have room for 12 volleyball courts, six basketball courts, or three NBA-sized basketball courts, depending on how it’s configured, in addition to offices and seating. She said One Loudoun envisions building the recreation facility instead of paying the county capital contributions that would normally be associated with the additional housing. In this case, according to staff reports, that would come to $13,135,233 to offset the impact of the new housing. “We envision this as being run like a business, such that, yes, there would be maintenance, but that the tickets for the operation of a facility like this would more than cover any sort of maintenance challenges associated with it,” Gillis said. The facility will be complete before One Loudoun finishes building the homes permitted under its current zoning, Gillis said, and the additional housing requested in its application will develop as the market allows. A location for the indoor recreation center has not been set. Among other options, the developer is considering building it above a parking garage. Loudoun has been floated as the location for other major sports facilities. The Virginia Investment Partnership planned to build a stadium at One Loudoun for a minor league baseball franchise, the Loudoun Hounds, and a North American Soccer League team, the Virginia Cavalry, but the stadium lease was terminated when construction failed to start. One Loudoun’s developers won the lengthy legal battle with VIP and retains the zoning rights to build a stadium along Rt. 7. Last year, DC United even considered relocating its stadium to Loudoun. Ashburn also is home to the Washington Redskins headquarters and training center and more recently talk has surfaced about building a replacement for FedEx Field near Dulles Airport. According to a report by George Washington University, sports tourism visitors spent $8.96 billion nationwide in 2014, a 3 percent increase over the previous year. Beth Erickson, president and CEO of Visit Loudoun, said sports tournaments generated $2,260,000 in hotel room revenue and $113,000 in transient occupancy taxes for Loudoun in fiscal year 2015 alone. Visit Loudoun projects a 36 percent market increase in fiscal year 2016. “What’s most intriguing about this market is that when it comes to youth sports, we’re looking at the entire family coming to watch,” Erickson stated. “Families often view tournaments as ‘mini vacations’ which leads to overnight hotel bookings as well as increased traffic for our restaurants, shops and attractions.” She said, when it comes to adult tournaments, visitors are interested in outdoor recreational activities, as well as visiting craft breweries and wineries. “It’s a win-win for Loudoun County.” She added that, residents get the benefits of the new facility, while tournaments from outside the county drive increased tax revenue and are “a boon for our businesses.” [caption id="attachment_14277" align="alignright" width="300"]

Inside Round Rock Sports Center in Round Rock, Texas. (Henry Huey, flickr.com/henry_huey)[/caption] The One Loudoun plan has been compared to the Round Rock Sports Center, an 82,800-square-foot facility in the city of Round Rock, TX. Representatives from the Loudoun County Department of Economic Development and Visit Loudoun toured that facility in May 2015 and liked what they saw. That center opened in January 2014, and has since played host to tournaments ranging from badminton to basketball to bocce ball. It employs nine full-time City of Round Rock workers and up to 60 part-time employees for events. It already has events booked almost every weekend through August. But unlike the $14.5 million Round Rock Sports Center, which was primarily built with funds from the city’s hotel occupancy tax; Loudoun County won’t pay a dime for One Loudoun’s indoor recreation center. Miller & Smith, the developer behind One Loudoun, declined to comment until after a decision is made on the rezoning decision that would allow the recreation center.