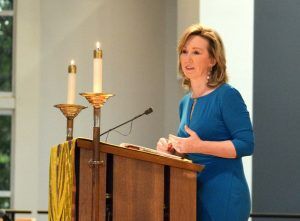 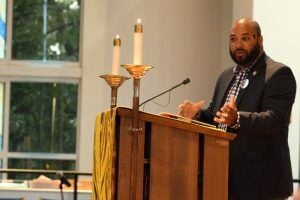 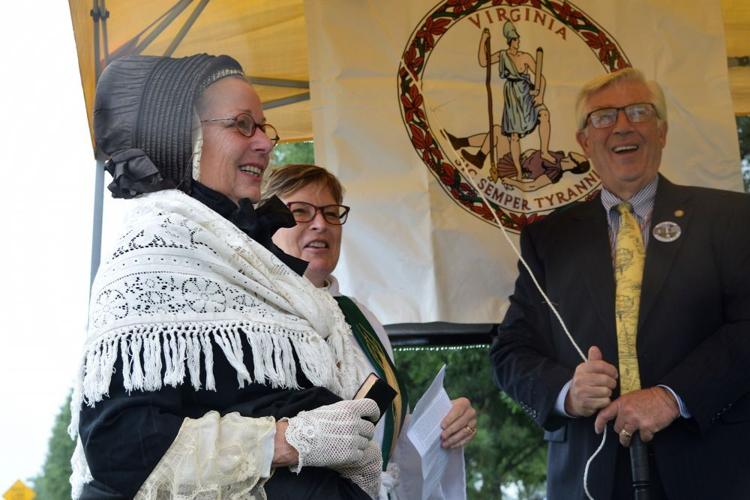 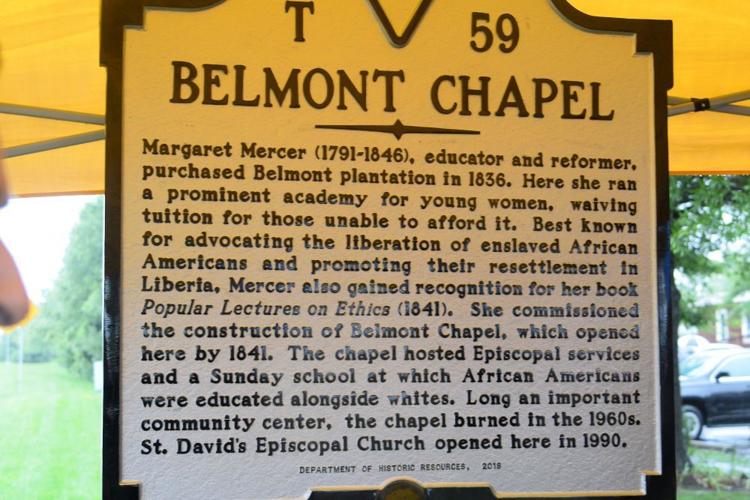 Loudoun's newest historical marker, highlighting the significance of the Belmont Chapel in Ashburn, was formally unveiled during a ceremony at St. David’s Episcopal Church and School on Sunday. The event was a celebration of the life of Margaret Mercer, the progressive educator and abolitionist who built the church in 1841. Speakers highlighted Mercer's opposition to slavery, efforts to resettle freed Africans in Liberia, and her bold, even lawbreaking commitment to educate the children of slaves. Mercer, the daughter John Francis Mercer, a Maryland governor who also represented Virginia in the Continental Congress, purchased the 400-acre Belmont Plantation from the Ludwell Lee family in 1836. She established a boarding school, using the tuition from families who could afford to pay to attend the school to educate those who could not. In addition to freeing the slaves she inherited from her father, Mercer was a founder of the African Resettlement movement. Those ties with Liberia remain today, as the congregation of St. David’s Episcopal Church, which was established at Belmont in 1990, supports a school in the west African nation. U.S. Rep. Barbara Comstock (R-VA-10) said Mercer's life set an example for women to follow today. "This dedication inspires each us to learn more about our past and trailblazers like [caption id="attachment_54620" align="alignright" width="300"]

U.S. Rep. Barbara Comstock speaks at St. David’s Episcopal Church and School in Ashburn during the Belmont Chapel historical marker dedication ceremony.[/caption] Margaret Mercer, but we know there are so many others that our daughters and granddaughters need to know. They need to know their stories. They need to walk in the steps of these leaders to understand what their lives were like at that time." Loudoun County Chairwoman Phyliss J. Randall (D-At Large) pointed to Mercer's decision to free her family's slaves as a remarkable defiance of her father, who believed that slavery was ordained by God. Her commitment to educate the children of slaves—at a time in Virginia when it was illegal to teach black people to read or write—was courageous. "Her most important legacy was courage. She had such remarkable courage," Randall said, adding that Mercer set a moral example that should provide inspiration for residents today. "I believe that she would say good intentions only go so far. Good intentions have to be matched with actions when you know people are experiencing injustice. I believe she would say it is not good enough to be good silently; you have to be good loudly. Your goodness should scream. Your goodness should permeate. Your goodness should cause others to vibrate. Being good is noble. Being good loudly is correct." "Margaret Mercer was one of a sisterhood of Episcopal women who embarked on this path contrary to the mores and expectations of Virginia culture—and sometimes the Episcopal Church," said Julia E. Randle of the Episcopal Diocese of Virginia, noting that many of the church's clergy at the time were slaveowners. Mercer and others like her, "seemed to live in their lives those vows we take today: to seek and serve Christ in all persons, loving your neighbor as yourself, and to strive for justice and peace among all people, and respect the digntiy of every human being. We take those vows today; they lived them without taking those specific vows then." Supervisor Koran Saines (D-Sterling), whose mother is Liberian, reflect on his close [caption id="attachment_54613" align="alignright" width="300"]

Supervisor Koran Saines speaks at St. David’s Episcopal Church and School in Ashburn during the Belmont Chapel historical marker dedication ceremony.[/caption] ties to Mercer and St. David's Church. He said that family research has documented that his ancestors—four brothers who were free tradesmen—were among the first to be transported to Liberia as part of the resettlement movement Mercer had championed. Also, Saines said his grandmother had attended the Bromley Missionboarding school that is supported today by the St. David's congregation. He thanked the church for its continued support of the country, including sending extra supplies in times of crisis. Minister Gabriel I.H. Williams of the Liberian Embassy also celebrated Mercer's efforts. "She educated boys and girls from all walks of life—slaves or free. Margaret Mercer worked for freedom and dignity for all people," he said. He highlighted the continuing close connections between Virginia and Liberia and he urged them to be strengthened by investments that would help build the nation's industries, including fisheries, tourism and agriculture. While there are many schools to support by providing books and other resources, Williams said there were other ways to help Liberia. "We are not just looking for handouts. We need investment. We need opportunities," he said. Clyde Smith of the Virginia Department of Historic Resources said that there are 2,700 historical markers across Virginia. "We're very fortunate to live in a state with such wonderful history. You've probably heard of George Washington and Thomas Jefferson, but sometimes our real, real heroes are lost in the history," Smith said. "It's great today that St. David's has put all this together." The text of the historical marker, which is located in front of St. David's at 43600 Russell Branch Parkway, reads:

Margaret Mercer (1791-1846), educator and reformer, purchased Belmont plantation in 1836. Here she ran a prominent academy for young women, waiving tuition for those unable to afford it. Best known for advocating the liberation of enslaved African Americans and promoting their resettlement in Liberia, Mercer also gained recognition for her book Popular Lectures on Ethics (1841). She commissioned the construction of Belmont Chapel, which opened here by 1841. The chapel hosted Episcopal services and a Sunday school at which African Americans were educated alongside whites. Long an important community center, the chapel burned in the 1960s. St. David’s Episcopal Church opened here in 1990.